Actress reacts after papa Suniel Shetty’s statement on her shaadi


It is known to all that Suniel Shetty’s daughter Athiya Shetty is in love with cricketer KL Rahul. On quite a few occasions, both of them have expressed their love for each other in public via social media. Of late, whispers are being heard that Athiya and KL Rahul are planning to settle in matrimony soon. Though earlier there were reports suggesting that the star couple will have a winter wedding, the latest rumour had it that Athiya and KL Rahul are planning to get hitched in the next three months. However, it is not true as per the latest post made by Athiya. Also Read – Being Kamal Haasan’s daughter helped Shruti Haasan get work? Salaar actress opens up

Athiya Shetty rubbishes rumours of wedding
The Motichoor Chaknachoor actress Athiya Shetty took to her Instagram stories to set the record straight. She made a sarcastic post saying that she hopes she is invited to the wedding that is going to happen in the next three months. She joked about it and subtly she rubbished the rumours that are doing the rounds on the internet. Also Read – After Ratan Rajput, Shehnaaz Gill takes up farming; says, ‘Mummy maregi’ [VIEW PICS] 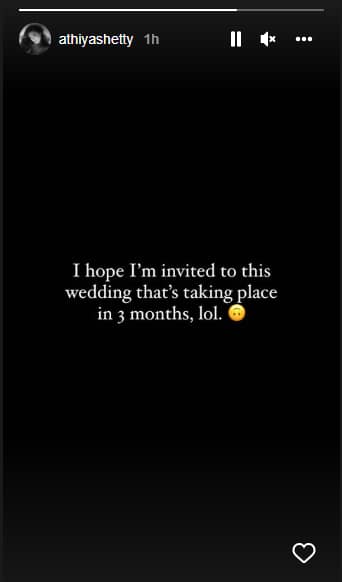 Suniel Shetty reacts to the wedding rumours
Earlier, it was papa Suniel Shetty who reacted to the reports. To Radio Mirchi he stated that nothing has been planned as of yet. At an event in the past, Suniel Shetty stated that his blessings are with KL Rahul and Athiya. He had said, “She is a daughter, she will get married sometime. I’d want my son also to get married. The sooner the better! But it’s their choice. As far as Rahul is concerned, I love the boy. It’s for them to decide what they want to do, because times have change. I’d like them to take the decision. My blessings are always there.” Well, we all can just wait for the couple to drop the official deets of their wedding.

GUWAHATI: The second T20I between India and South Africa had to be stopped after a snake invaded the...
Maharashtra