Comedian Raju Srivastava breathed his last on Wednesday after being hospitalized for 42 days at Delhi’s AIIMS Hospital. Bhai Dipu Srivastava confirmed his death. 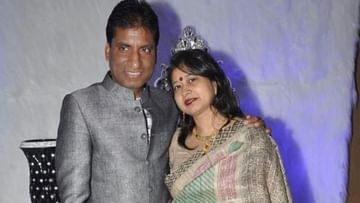 Raju Srivastava with his wife Shikha

Raju Srivastava is no more with us. He breathed his last at the age of 58. Raju Srivastava was battling the disease for a long time. On August 10, he suffered a heart attack while exercising in the gym, after which he was admitted to AIIMS Hospital in Delhi. Fighting for 42 days in battle with life, he was finally defeated. According to hospital sources, famous comedian Raju Srivastava was declared dead at 10:20 am. After his death, his wife Shikha started crying bitterly.

Comedian Raju Srivastava breathed his last on Wednesday after being hospitalized for 42 days at Delhi’s AIIMS Hospital. Bhai Dipu Srivastava confirmed his death. Raju Srivastava was 58 years old. Raju Srivastava suffered a heart attack on August 10 during a workout at the hotel gym here. After this, she was taken to AIIMS and she underwent angioplasty there. Since then he was constantly on ventilator, but he never regained consciousness.

In a recent interview to a leading online portal, late comedian’s wife Shikha Srivastava said, “I am not able to talk right now. What can I share or say now? He struggled a lot, I was really hoping and praying that he comes out of it. But this did not happen. All I can say is that he was a true fighter.”

According to hospital sources, Raju Srivastava was declared brought dead at 10.20 am. Giving information, Raju Srivastava’s brother Deepu Srivastava said, “I got a call from the family about half an hour ago that he was no more. This is really unfortunate news. He was fighting for life in the hospital for 40 days.

Leaders reacted to the death of Raju Srivastava

Many celebrities, fans and politicians including Prime Minister Narendra Modi, Nitin Gadkari, Rajnath Singh and Piyush Goyal condoled his death. Raju Srivastava’s last rites will be performed on Thursday, 22 September 2022. This will be done at 9.30 am at Nigambodh Ghat in New Delhi.

The entertainment world is also immersed in mourning for Raju Srivastava on his death. Apart from Ravi Kishan, Sunil Pal, Ehsan Qureshi, many more people have paid tribute to him.