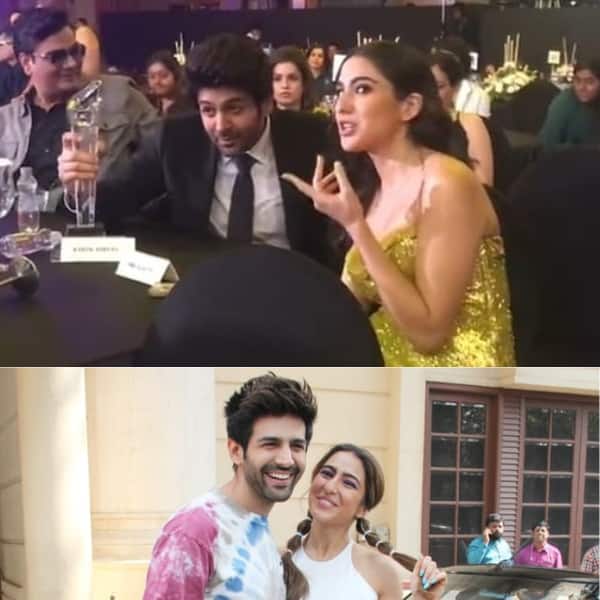 Whenever asked about their relationship, Sara and Kartik would have vague reactions and it just fueled the rumours and gossipmongers. But when they reconnected earlier this year at another awards night, both Sara Ali Khan and Kartik Aaryan were quite cordial. And now, as they were spotted at the OTT Play Awards last evening, their animated conversation has yet again set the tongues wagging. A video of Sara and Kartik chatting and smiling with each other is going viral online. The two even sat together and as per reports talked with each other for a long time. Check out the video and the reactions below: Also Read – Sara Ali Khan trolled and called Deepika Padukone’s ‘kamwali’ for her simple attire; Ranveer Singh compared to Abhijit Bichukale as they attend Ganpati celebrations

Fans need to stop fighting #SaraAliKhan and #KartikAaryan are cordial with each other so support and love whom you want and you can ship them as costar or friends but as couple it’s embarrassing?

Kartik and Sara win big at the OTT Play Awards 2022

It was a big night for Sara Ali Khan and Kartik Aaryan as they both won an award each. Kartik picked up the Best Actor Male – Popular (Film) trophy for his performance in Dhamaka, Sara bagged the Breakthrough Performance of the Year Female trophy for her acting chops in Aanand L Rai’s Atrangi Re. Also Read – Aashiqui 3: Not Jennifer Winget, Shraddha Kapoor or any other actress, but THIS actor wants to romance Kartik Aaryan