Shabana Azmi started her film career in the year 1973 with Shyam Benegal’s film Ankur. At that time this film was very successful. 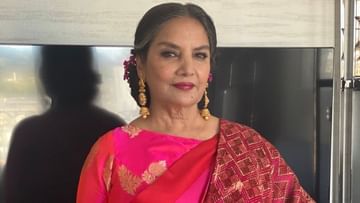 Shabana Azmi… one such Bollywood actress who has adapted herself in the best way according to every role. He has done many roles in Hindi cinema till now. He is still active in films. Apart from being an actress, she has also been a member of Rajya Sabha. Along with this, she is also associated with social work. Shabana Azmi is the wife of veteran Bollywood writer, lyricist Javed Akhtar. Today is Shabana Azmi’s birthday and on her birthday we are going to tell you some aspects related to her life, which you hardly know about.

Shabana Azmi’s father was Kaifi Azmi, who was a famous poet and poet. While his mother’s name was Shaukat Azmi, who was an Indian theater artist. Shabana Azmi also has a brother, whose name is Baba Azmi. Bollywood actresses Tabu and Farah Naaz are his nieces. Shabana Azmi chose her career only because of the legacy she got from her mother. Shabana Azmi did her early studies from Queen Mary School in Mumbai. He has graduated in Psychology. He has taken this degree of graduation from St. Xavier’s College, Mumbai. Apart from this, Shabana Azmi has done acting course from FTII Pune.

Shabana Azmi is married to veteran Bollywood writer and lyricist Javed Akhtar. Javed Akhtar was already married, but he started leaning towards Shabana Azmi. This inclination turned into love, after which he divorced Honey Irani and married Shabana Azmi.

Shabana Azmi started her film career in the year 1973 with Shyam Benegal’s film Ankur. At that time this film was very successful. Due to this film, Shabana Azmi managed to make her place in Bollywood. She also received the National Award for Best Actress for her debut film. After this film, she was awarded the National Award for Best Actress from 1983 to 1985. And the films for which he received this award were ‘Arth’, ‘Khandhar’ and ‘Par’.

Prove yourself to be different in the crowd

Shabana Azmi had proved herself apart from the crowd even in that period. On one side there were glamorous actresses and on the other side was the amazing actress Shabana Azmi. Shabana Azmi did many films in her film career, including ‘Arth’, ‘Nishant’, ‘Ankur’, ‘Sparsh’, ‘Mandi’, ‘Masoom’ and ‘Pestan Ji’. Apart from this, he also worked in many films, which people still like today.

Came into controversy after kissing scene with Nandita Das

She was also in controversies regarding her shaved head and kissing scene with Nandita Das in the film ‘Fire’. In the year 1993, Nelson Mandela had kissed Shabana Azmi on the cheek during his tour of India, which created a controversy.

Shabana Azmi has worked in more than 100 films in her career so far, for which she has been given the National Award for Best Actress 5 times and has been awarded the Filmfare Award 4 times. In addition, he has been awarded an honorary doctorate in the arts through Chancellor Brandon Foster of Leeds Metropolitan University in Yorkshire.