This is the last video of Raju Srivastava, which was to be shared on August 15

A video of Raju Srivastava has surfaced, which he made in advance for this 15th August. But, he could not post it due to an accident on August 10 itself. 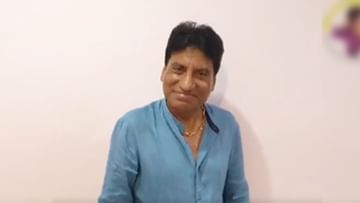 The passing of Raju Srivastava is a big loss for everyone. He had not only made a mark in the industry with his tremendous comedy, but had also made a place in the hearts of people which could hardly be blurred. The grief of his passing has left everyone disappointed. A video of Raju Srivastava, popularly known as Gajodhar Bhaiya, has surfaced. Seeing this, everyone became silent. Raju had made this video in advance to share on 15th August, but unfortunately he suffered a cardiac arrest on 10th August and he could not post this video.

Tears will come out of your eyes after watching this video. This is the last video of Raju Srivastava which he made with great enthusiasm in advance for the upcoming 75th Independence Day festival on 15th August. But, he could not share it. In the video, Raju is seen expressing his love for the tricolor. Seeing this clip, it can be gauged that how big a patriot he was and how much he was attached to the tricolor. Also, it can be clearly seen in the video that how much respect is there for the tricolor in his heart.

The last video of Raju Srivastava, which he did with great enthusiasm on the 75th of August #independenceday #75thyearofindependence Made in advance for But the accident happened on the 10th itself. #rajushrivastava #Raju_Srivastava #Raju #rajusrivastava #RajuSrivastavaDeath pic.twitter.com/Rkbpoot1J1

Raju proudly called himself a patriot

In the video, Raju Srivastava is saying that friends, my heart is also feeling that “I should also apply Tricolor DP with pride, our country is and the country has become independent on 15th August… I will apply Tricolor DP but with this thinking It hurts that how will I remove this DP… Next to this Raju says that I do not have the right to remove the tricolor DP. I am also a patriot like you…”


Tomorrow morning Raju will be lit

Nupur Shikhar wore a ring to Ira while sitting on her knees, shared a romantic photo

Monday Flashback: When Rishi Kapoor Got Angry Over Ramesh Sippy For Calling Him By Nick Name Chintu